In the recent blog posts we presented how to embed Husarnet VPN Client inside a Docker container. This solution is fine, however has a few drawbacks like:

To overcome those issues we introduced an official Husarnet Docker Image, that utilizes a sidecar Docker design pattern. You can run this container next to your existing containers to share the VPN network from a Husarnet Container to one or multiple other containers at once.

Pros and cons of both solutions​

As you can see there are many things to consider when choosing how to integrate Husarnet with your apps. Unless you have a very specific case, the sidecar pattern will be better for production use. If you want to learn more about Husarnet's internals - installing Husarnet Client directly into your own container will be a viable experiment.

How do I use the sidecar, then?​

In this example we'll describe the Docker Compose setup. It'll be fairly easy to migrate these concepts to your favourite Kubernetes configuration engine if you need to. Keep in mind that all containers in a pod already share a network namespace, so you won't need to add extra config for it.

As you can see we have two containers here. One for our app and one for the Husarnet sidecar.

Let's focus on the app first. There are no special limitations to what you can do to your app(s) except two:

As per husarnet declaration you'll find all the important stuff in the comments. This is a pretty minimal example so there's not much you can omit, but you definitely can change things around. I.e. you can change the way environment variables are defined (as long as they are defined), you can name your volumes, etc.

Example use case for Husarnet Container​

In this example we will show you how to use a cheap VPS as a reverse proxy for your LAN devices that do not have a static public IP (or they do but you don't want to expose it).

In this example Raspberry Pi will be the "LAN" device and VPS will be the "public" device, but you can change it with other similar things - i.e. your parent's place have a public IP, but your's doesn't - with a little bit of tinkering you can change the VPS to a second Raspberry Pi at their's place or you can even use this method to expose your ESP32's to the internet (you won't need the Raspberry Pi part in that case - you'll simply use the IPv6/hostname of your ESP32 on the VPS's config instead)!

As the example application we'll use a Kubernetes demo app provided by Google, as it's plain and simple, but you can do all the regular stuff Docker allows you. Static websites? Of course. Wordpress for your blog? Sure. You'll find lots of tutorials on the Internet, just apply hints from the previous chapter of this blog post.

You'll find all the required files on Github. There are three naub directories there, but we'll use only two for the most part of this example:

Do that both on your Raspberry Pi and on the VPS.

The official instruction how to install Docker on Linux is the best tutorial but here's a quick rundown for you (for Linux):

Save the Husarnet IPv6 address you get. You'll need to enter it into your Nginx's config file.

Prepare the reverse proxy server on your VPS​

In your favourite browser you can now access your website running on Raspberry Pi via a proxy server's public IP address! 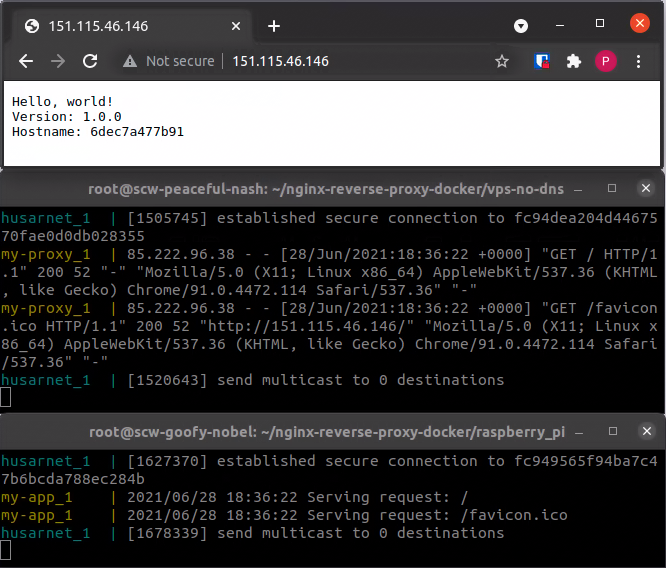 As you can see, using a Husarnet Container as a docker VPN sidecar is a clean and easy solution to integration of Husarnet with your projects. This way you can add an SDN-like layer to your projects and make it much more flexible than the regular implementations.

We hope you will find this article helpful.

We would be happy to discuss the topic covered in this blog post on the Husarnet Community Forum.

If you don't want to put raw IPv6 addresses in your config files, there's an vps-dns directory in the repository with a proof of concept of a solution utilizing hostnames. It has a slight drawback of requiring yet another container/sidecar to be running alongside the existing containers and some extra fiddling with the volumes, but… if you need it - it's there for you to reference while building your own solution. As it's a little bit more complex solution, we'll leave it without a thorough comment for more advanced users.